Design of a Radio Direction Finder for Search and Rescue Operations: Estimation, Sonification and Virtual Prototyping 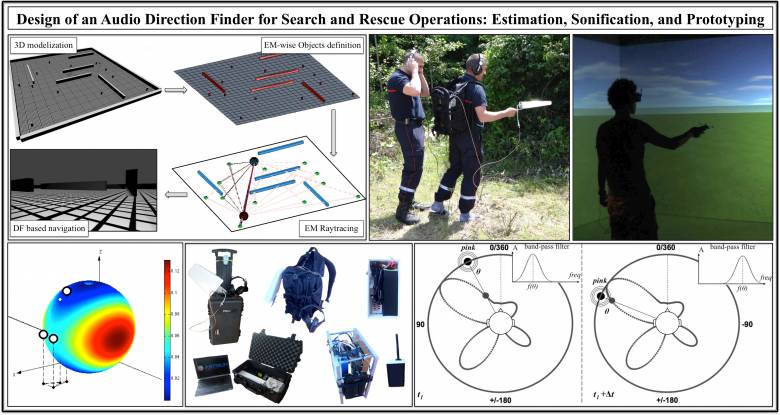 The project objective is to design a device to assist rescuers during search and rescue operations, providing victims localisation based on the electromagnetic waves emitted by their cellphones. Said device must be lightweight enough to be backpacked and guide rescuers in their navigation towards a given victim, like a compass. The core of the project is the interface of this "Direction Finder" (DF): it has to be based on audio only, providing rescuers with an eyes and hands free guidance system.

The project is organized in three parts. The first part investigates "Direction Finding" solutions, exploring signal processing techniques to answer the question: "what is the direction of arrival quality one may expect for a given Direction Finder design complexity?". The second part tackles "sonification" (conveying information from machine to human through sound) and proposes / assesses different sonification designs conveying an information issued from a DF: direction (e.g. North-Est), received signal strength, etc. The last part details the design and implementation of two DF prototypes: the one virtual, the other real, and exposes how each of these prototypes have been exploited to assess the performance of different audio DF designs.

Search of a virtual target: virtual architecture and interactions illustration.

Search of a virtual target: virtual environment and sonification illustration.

Search of a virtual target: Raytracing (based on IlmProp) and simulation illustration, prototype v2, Geiger counter metaphor based on summed antennas RSS + binaural panning based on Left/Right antennas RSS.